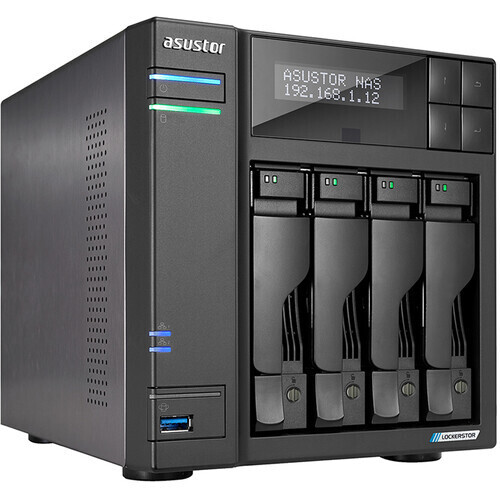 Expand your storage options with the Lockerstor 4 AS6604T 4-Bay NAS Enclosure from ASUSTOR. Designed for home or small-business applications, this 4-bay NAS enclosure sports a 2.0 GHz Intel Celeron J4125 quad-core CPU and 4GB of DDR4 RAM. Memory can be extended up to 8GB, while two M.2 2280 SSD bays allow users to install cache drives. 8GB of eMMC memory is also present for caching data. Supporting RAID 0, 1, 10, 5, 6, Single and JBOD modes, as well as 1 and 5 + Spare modes, this enclosure's bays accept 2.5 or 3.5" SATA III SSDs or HDDs. Two 2.5 Gigabit Ethernet ports provide networking connections, while additional accessories can be connected using a USB 3.2 Gen 1 Type-A port on the front panel, or two ports on the rear panel. An HDMI 2.0a port is also present on the rear panel, providing graphic as well as audio output.

The AS6604T can reach sequential read and write speeds of up to 590 and 591 MB/s, respectively, using link aggregation in RAID 5. AES 256-bit encryption helps to prevent unauthorized access to and breaches of sensitive business data, while a Kensington Lock slot allows users to physically secure this NAS enclosure. Operating on 100 to 240 VAC using a 90W external power supply, the Lockerstor 4 AS6604T stays cool, thanks to a built-in 120mm fan. In addition to an AC adapter and power cord, this NAS comes with two RJ45 network cables and screws for securing 2.5 or 3.5" drives. The ASUSTOR Lockerstor 4 AS6604T runs on the ADM 3.5 operating system and is compatible with Windows XP and Vista, as well as Windows Server 2003, 2008, 2012, and 2016. It is also compatible with host computers running Mac OS X 10.6 and later, as well as machines using UNIX, Linux, and BSD.

The Lockerstor 4 utilizes the Intel Gemini Lake Celeron J4125 quad-core CPU and is 30% faster than Apollo Lake. The Celeron J4125 features an on-chip cache to 4MB and a burst frequency of 2.7 GHz.

The Lockerstor 4 comes with 4GB of DDR4 RAM and can be upgraded up to 8GB. Compared to DDR3 memory, DDR4 RAM provides up to 30% greater performance while also lowering energy requirements by 40%.

ASUSTOR NAS enclosures provide different RAID Volume options, giving your data various levels of protection from the moment it is first stored on the NAS.

The Lockerstor 4 provides two 2.5-Gigabit Ethernet ports. Enable up to 150% faster performance than Gigabit Ethernet with compatible hardware and up to 5 Gb/s using Link Aggregation.

The Lockerstor 4 is a high-capacity NAS designed for enterprise environments. The Lockerstor 4 is flexible, supporting online capacity expansion and replacement. Online capacity expansion enables you to replace hard drives inside the NAS without downtime. The Lockerstor 4 also enables you to scale your NAS alongside your needs by first purchasing smaller drives and then adding more drives as needs arise. Additional drives can be purchased as your storage requirements grow and all drives can be fully replaced while continuing to use your NAS. Combining this with ASUSTOR's MyArchive cold storage technology enables you to store a virtually unlimited amount of information.

Protected from the Inside and Out

ASUSTOR NAS ensures data security by creating an in-depth data protection plan that protects your data from the outside in. Utilization of a multi-layered deployment scheme allows for the achievement of active network, system, and data protection.

Get even more possibilities for ADM with Portainer for Docker images. With thousands of images, Portainer can download and deploy more types of programs than ever before. Portainer is incredibly user friendly and employs a graphical interface to make Docker images easier to deploy than ever.

ASUSTOR EZ Sync brings the magic of cloud sync services right to your home. With an ASUSTOR NAS and EZ Sync, data can be synchronized anywhere with an internet connection without an additional monthly bill or a data limit. If data is unintentionally modified, restoration is easy with EZ Sync's automatic file history management feature.

The ASUSTOR NAS provides enterprise-class hardware and software and is compatible with VMware, Citrix, and Hyper-V virtual storage environments. Furthermore, iSCSI/IP-SAN and NFS support allow this NAS to seamless integrate with existing IT environments, providing an optimal storage solution.

Snapshot Center allows ASUSTOR NAS devices to utilize Btrfs and iSCSI volumes to take snapshots of the information inside a NAS. Snapshot Center supports up to 256 snapshots of a volume and can be done every five minutes, creating a backup that can be restored easily if data is damaged or lost. MyArchive now supports Btrfs and snapshots. Btrfs for MyArchive supports snapshots and version history to help protect against accidental deletions or modifications.

Created for the Digital Home

ASUSTOR NAS allows you to play digital entertainment at any time. Using the Lockerstor 4's built-in HDMI port with various multimedia apps, the NAS can be connected directly to UHD TVs and players. Enjoy multimedia with family and friends or use the UPnP multimedia server to stream your favorite media to compatible computers and mobile devices.

The powerful ASUSTOR NAS provides optimal reliability for homes and small businesses looking to set up a surveillance system. Four free camera channels are provided, making it an apt surveillance solution for users with smaller demands. The Lockerstor 4 supports up to 40 cameras, with licenses available separately. View surveillance feeds on Surveillance Center and its corresponding mobile app, AiSecure. AiSecure also supports streams while on the go with an internet connection.

Photo Gallery 3 and AiFoto 3 bring a variety of features to make photo organization easier than ever. Take advantage of custom folder selection, timelines, smart albums, and photo modes. Easily blow up photos to up to twice their size, play songs on slideshows, or use performance enhancements and customized share links for an even more engaging photo viewing and sharing experience.

Stream from a phone, tablet, or computer to multiple platforms, including YouTube, Twitch, Mixer, or RTMP-compatible platforms. ASUSTOR Live doesn't require fees to operate or to stream to multiple platforms and channels, saving you money and resources. Recordings can be safely saved to your NAS for future use.

ASUSTOR's EZ Connect allows you to connect to your NAS from anywhere with your smartphone to access and share your files. The ASUSTOR suite of mobile apps provides passcode locks to help protect your privacy and data. You can also make use of HTTPS connections for even greater security.

Save this product for later
Display prices in: INR